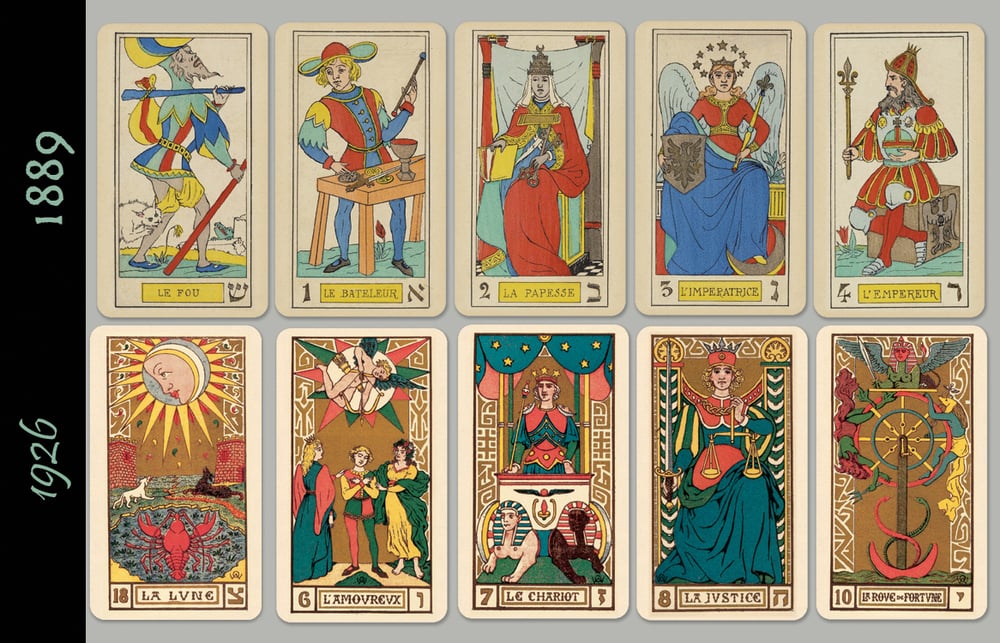 Wirth only produced tarot majors, never a full 78-card deck. These are facsimile copies of his originals.

In the preface to his book, "Le Tarot, des lmagiers du Moyen" published in Paris in 1926 and translated into English as "The Tarot of the Magicians" by Samuel Weiser in 1985, Wirth attributes his blossoming knowledge of tarot to another young occultist, Stanislas de Guaita. Guaita admired Wirth's artistic talents and "advised [him] to restore the 22 arcanas to their hieroglyphic purity... The ideal to be realized demands a perfect unity of symbolism, so that everything fits into the 22 compositions, which must throw light upon each other and must contain no arbitrary detail which is not justified."

The product of this first effort came to fruition in 1889.

By the 1920s Wirth's knowledge of the tarot had matured. His later effort resulted in images that were richly redrawn into illustrations with colors altered to conform with his expanded knowledge. A few details and colors changed somewhat and Eros in the Lovers card was unmasked. The results were a sumptuous feast for the eyes..

The 1926 images appeared in a supplement to his original book.

These cards are genuine facsimiles of the original drawings from the supplement to that book. No alterations to the lines or colors so you don't have anyone's interpretation of the original artist's intentions.

In Wirth's book he has a chapter devoted to the symbolism of the colors he used in the cards. I find it interesting that in the 1889 rendition the flesh of Fool and the Papesse is gray (or is it silver?) instead of rose (his description of flesh tones) and that these two are depicted as having typical flesh tones in the later version. The symbology of the color gray in the book is "ashes, indestructible remains of what has lived, inertia, indifference, humility, sadness ,,, " while silver is "moral perfection, treasures of the soul, justified beliefs, nobility of heart, purity of the imagination." The images beg 2 questions: Which color did he intend for them (gray or silver)? and What changed in his interpretations for his later images?

The decks will be specially ordered just for you and mailed in 3-4 weeks, although probably sooner.

Some of my decks may be on hand and mailed out immediately. Others will be specially ordered just for you and mailed in 3-4 weeks.

I may use a different printer for ex-USA buyers because the international postage from the US-based printer is extremely high. For international buyers the tarot size cards come in a plain tuck box and Lenormand cards come in a clear plastic box because that printer doesn't offer reasonably priced custom printed boxes. The decks come with a title card you can affix to the boxes, if desired.

There are some locations where I will not ship via regular mail including Mexico and Brazil because regular has gone missing. If you are from the countries with unreliable postal systems I will return your payments. If you are serious about wanting the decks we can make other arrangements.
_______________
NOTE PLEASE READ: This is a facsimile reproduction or a restored reproduction of actual cards or period art (the Papus and 1926 Wirth decks). There is no accompanying instruction booklet but may or may not contain instructions or information on additional cards. The card stock is made to be shuffled and used and, as such, may be a disappointment to "collectors" but will delight aficionados who use and appreciate the art of antique decks. Each deck is made to order so please be patient. Your deck will be ordered immediately but may take up to 3 to 4 weeks to arrive. International shipping may take longer.